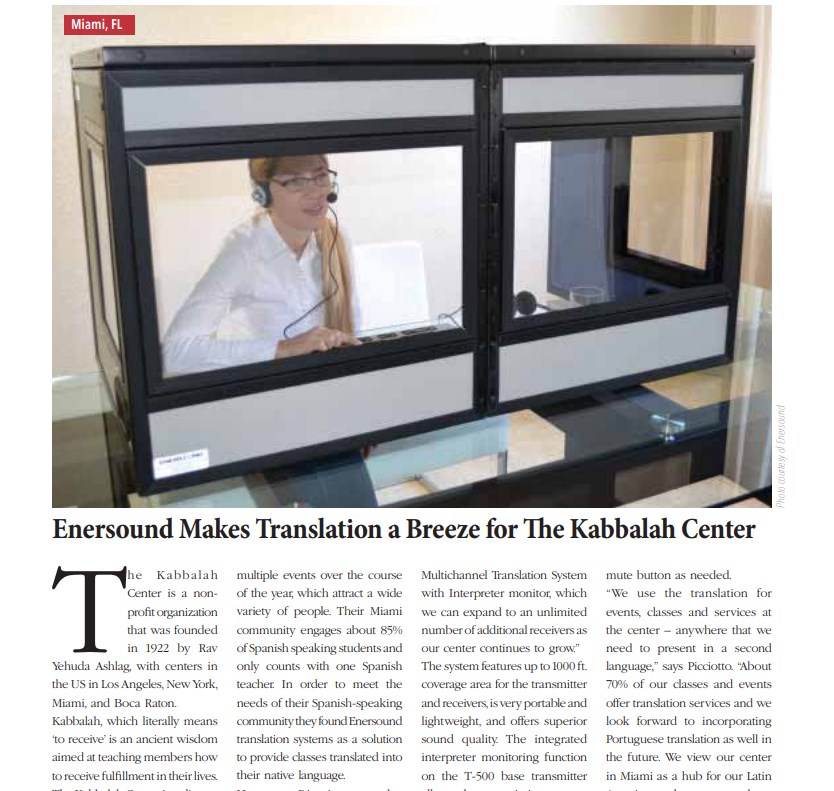 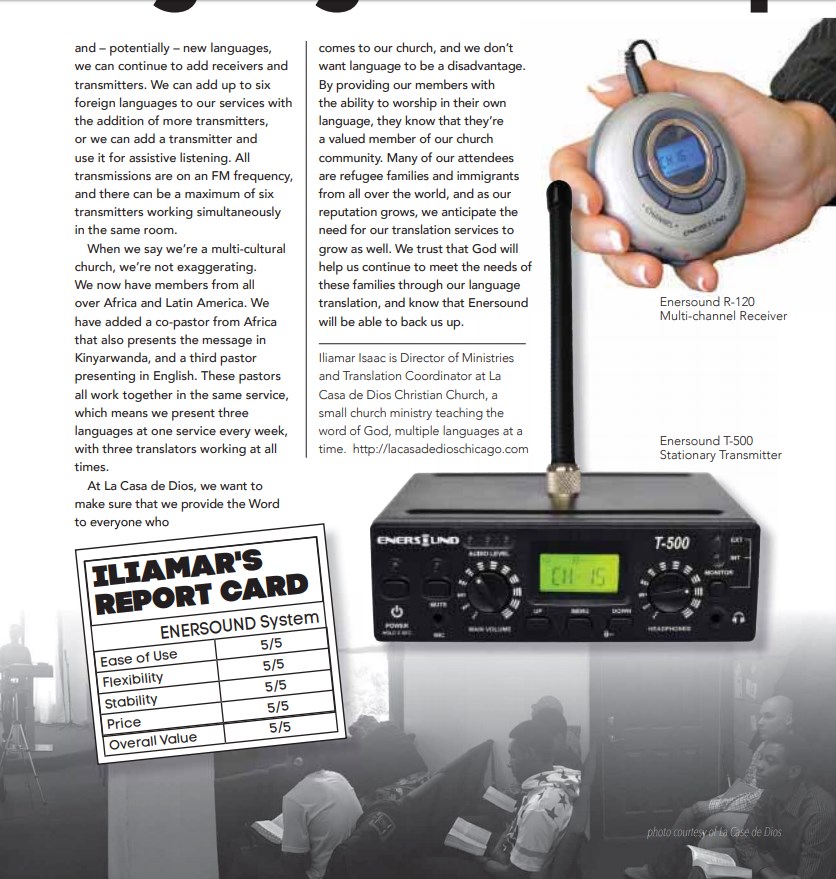 "The equipment is working perfectly - we use them each Sunday - by having them, we are able to have two services simultaneously (one in English, another in Spanish).  This is such a blessing - we thought we were going to have to conduct a complete new set of services to accommodate the Spanish speakers - with your equipment, that need has been met."

ConferenceMicrophones has become a key provider in many professional markets and fields, and our clients don´t hesitate to ensure that our products are the best solution for every communication need. One of our proudest clients is Linda Dunlap, a certified interpreter by the Supreme Court of Florida, who also serves as the President of the Association of Translators and Interpreters of Florida (ATIF).

"I'm a Florida court certified interpreter working freelance.  That means that I do civil law, not criminal (staff interpreters handle criminal court), although there are times when I do get to go to jail to help attorneys communicate with their clients.  I work mostly in state courts including  civil, family, and workers compensation courts, but have also worked in federal civil court.

A few years ago on my first court assignment, I found myself in court having to speak to three plaintiffs in simultaneous mode.  I was expected to speak softly enough not to interfere with the proceedings but loudly enough for them to hear me.  I didn't have any equipment and found that modulating my voice to let all three plaintiffs hear me without disturbing the attorney next to them was a bit tricky.  I immediately saw the need for equipment, but being a newbie, let it go until I was in another courtroom with a plaintiff who had been injured. For me to be able to speak to him (again, without interfering with the proceedings) I spent three hours stretched over a table (some of the workers compensation courtrooms have limited space). Needless to say, my back reminded me for the following week that I shouldn't have worked in that position!  And I can tell you that that experience convinced me that equipment wasn't optional, it was mandatory for court.

I don't like to wear headsets, so was concerned about finding a system I would actually use.  I tried several and purchased one by Enersound.  Since that time, I have learned to keep my equipment close at hand, as I never know when I'll be called in to work in court.  I've used it to allow attorneys visiting from other countries to know what is happening during a case.  I've also kept the defendants or plaintiffs aware of everything that is being said regarding the case.   The equipment I use is easy both to wear and to carry with me.   Sometimes speakers forget to speak into the microphones on their tables and I have to move from one side of the courtroom to the other in order to hear what its being said.  The equipment allows me to move about as needed (and those using the receivers can do the same).  It has several channels and has never caused a problem with the built-in sound systems.  Clients have been very pleasantly surprised with the sound quality, and often remark that they didn't expect it to be of such a high quality.  The equipment is as lightweight and easy to use for the interpreter as it is for those listening, and the latter have indicated that it didn't bother them to have to wear the earphones.

I recently purchased a second sound system as I was expecting to have to interpret for a larger group of plaintiffs.  The case settled so I didn't have to use all the receivers, but I'm glad that I have system as they all work with the previously purchased set, and I can now provide service for a small conference as well.

I've found arbitration prep (and other situations in which  consecutive mode (the interpreting mode used in witness testimony) is not required, can also be done more efficiently when using equipment, saving time and money for everyone.

As far as built-in systems in the courtroom are concerned, I have little experience. When doing an internship at Florida International University I did a 120 hour internship in criminal court and had the opportunity to interpret for public defenders in Miami who had the use of a closed circuit system which allowed them and the interpreters to communicate with and see their clients in jail.  I understand that a new remote interpreting system has been installed at criminal court in Miami, but I have not yet had the opportunity to see it.  Similar systems are used elsewhere in the state as well.  My criminal court staff colleagues at state court have told me that they have portable units for use in the courtroom, but setups and equipment vary from district to district.

In federal court, most of the courtrooms I’ve seen are built to include a section for the interpreters.  There, two interpreters usually work together because studies have shown that the synapses in the brain tend to start misfiring after 15-20 minutes, which is why the United Nations, US Federal court system, and the European Union have interpreters working in pairs during their sessions.  The systems for interpreters vary according to when the facilities were built and how they are used.

Using equipment allows interpreters to maintain a distance from prisoners, and so helps to keep the interpreters safe from illnesses as well as from any inappropriate actions said prisoners may make.

The quality of the sound and the weight of the equipment affect the way that it is used.  I encourage anyone having to make this type of purchasing decision to take these points, as well as the bottom line, into consideration."

- Linda Dunlap - freelance interpreter based in Miami, Florida.  She is certified by the Supreme Court of Florida as an interpreter for Florida courts and serves as the President of the Association of Translators and Interpreters of Florida (ATIF) Linda has taught in the Interpreting and Translation program at Miami Dade College.  She holds an M.A.in Spanish which she completed at New York University while living in Spain.